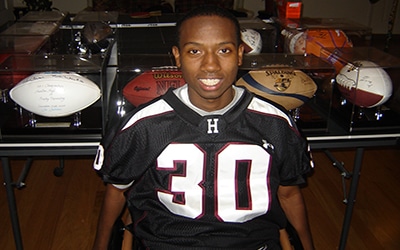 “He reminds me of how blessed I am to be an educator,” Hogan said of the Hamilton High School football player who suffered a serious spinal-cord injury in November that left him paralyzed from the waist down. He’s currently in rehabilitation at Barrow Neurological Institute in central Phoenix.

Hogan, an English teacher at Hamilton, is part of a team of five from the school that has been taking lessons to Jackson while he recuperates at Barrow.

This way, he won’t lose ground academically and will be positioned to graduate with his class in 2007. Jackson hopes to be cleared by doctors and physical therapists to return to the Hamilton campus for the fourth quarter this school year. If not, he vows to be back in the fall.

“I want to go back to school and be around everybody,” Jackson said.

Calling it “a learning process for both of us,” Hogan said this is her first experience with homebound instruction.

The Chandler Unified School District makes it available to any student who has either an acute problem or needs to be out for at least three months. Medical certification is required.

Hogan initially became acquainted with Jackson when he was in her zero-hour English class as a sophomore. His boundless enthusiasm won her over.

“There are students who leave footprints on my heart, and Joe was that student,” she said. “Every morning, he made me smile. Zero hour comes early (6:40 a.m.), but Joe was always full of energy. He is well liked by so many. It’s tremendous that our students drive down (to Barrow) and spend hours with their friend, having movie nights and playing video games.”

“We just let everybody come,” said Todd, an engineer at Intel who only recently returned to work. “We felt it would be right for Joseph. He is a social butterfly, anyway.”

Hogan said the family’s strength comes from its deep faith. “The Jacksons have taught me what true love for a son really means,” she said.